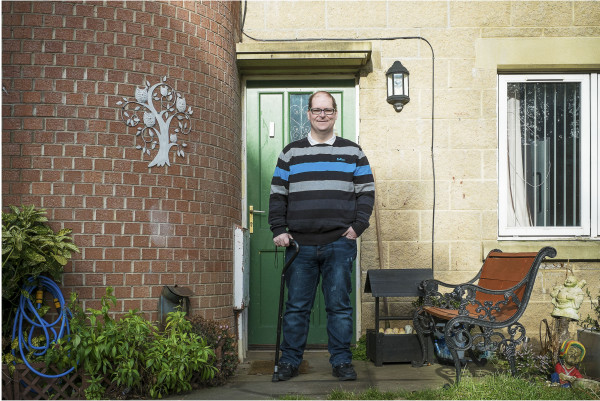 Below are the photographs and interview with David Corcoran who speaks about his involvement in the WHALE drama group and Westburn Village Neighbourhood Council.

You can listen to the interview with David here:

How long have you lived in the area?

How has the area changed since you’ve lived here?

I think its got a lot better in a lot of ways. When I first moved to Wester Hailes there was no paths as such, you go round the roads and there’s a lot of paths in the area now. There’s a lot of greenery, lots of trees and the area is a lot more beautiful than it used to be. There’s not so many of the high-rise flats which were, although they weren’t too bad there were still, they were a bit of an eyesore. There’s a lot of new houses since then.

Whats your favourite thing about living in the area?

I love the area I’ve always loved the area. I don’t know why. I like the area because there is still a reasonably good community spirit. People are still involved I quite enjoy getting involved with a lot of community groups, but I’m no in so much as I used to be. I enjoy being part of WHALE. I enjoy being part of the neighbourhood council. I think I like the idea that I have the countryside five seconds away from me.  I could walk up donkey lane and you would never think you were staying in Edinburgh, or I can jump on bus to the centre of town and get to the middle of town. You have the best of both worlds really and we have all the facilities we need really all around us. If you were at a point where you couldn’t leave the house you really have everything on the doorstep, which is lucky.

You said you were the Chairperson of Westburn Village Neighbourhood Council?

People aren’t shy about getting on to me about things. If anything goes wrong they are quite quick in phoning me and giving me a hard time, or following me up the street or waving me down in my car. Theres many a time I’ve almost knocked someone down because they are trying to wave me down to get something done.

So what sort of topics and things does it deal with?

Mostly things sort of socialising around the area and the community, getting things together. We’ve had quite a lot of good projects over the years. We did a fantastic woodlands projects where we cleaned up the woodlands right next to the Woods youth centre, well it used to be the youth centre. We had  a massive clean up down there. We organised a path down there. We got a fantastic sculptured Westburn stone down there, where you can sit down and enjoy it. You can sit down on the canal edge and enjoy the boats going past. It’s lovely in the summer, well actually its just as nice in the winter as well, bit muddy though. It’s really nice.

You are involved in WHALE Arts can you tell me a bit more about what you do there?

I like WHALE. WHALE is a great organisation because it does cater to everybody I think in a lot of ways. If you have any sort of artistry in you at all whether it be drama, stitching, painting or even digital photography they really do have a bit of everything. The kids and adults you see coming out seem to enjoy the place. I tend to do a lot more of board work now rather than around the building.

What sort of things does the Drama group do?

We have done quite a few shows over the years. We did promenade theatre which was using every room in the building, that was quite good. We did a Who Wants to be a Millionaire, which was quite loud and exciting for everyone that came along. We’ve done pantos and a couple of serious pieces. I think everybody wants to do a musical but I’m no a very a good singer. All you have to do is come along. It’s a good wee group, we are all nutters, we’re all mad. There’s a mixture of people there we don’t tend to, we like to make everybody feel welcome and most people that have come along have stayed.

You are also heavily involved in this project, Village Voices.

When I first heard about Village Voices I thought it was a great idea. I couldn’t believe how great an option it is to let people in our community know that there are people out there who are doing good stuff. There’s a lot of people who do amazing things who don’t get the recognition for it. I think this would be something that would be good for them.

I can’t believe I’m getting myself interviewed as part of it. That was not part of the plan originally but em… nevermind.