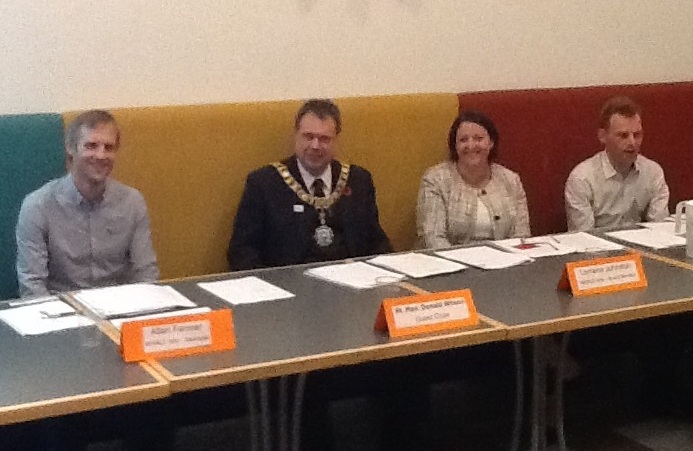 The WHALE Arts Agency AGM took place on Tuesday 11 November at the WHALE Arts Centre. The Lord Provost of the City of Edinburgh, the Rt Hon Donald Wilson, local councillor for the Sighthill and Gorgie ward, was guest Chair. The meeting was also attended by Councillor Ronald Cairns and Children’s Practice Team Manager for South West Edinburgh, Sean Bell.

Members were shown a scene from the drama group’s film ‘No Cows were Harmed in the Making of this Suburb’.

Board member Lorraine Johnston gave a run down of the accounts highlighting that though it had been a good year for project funding, the tough economic climate has meant that getting core funding had been difficult.

The board said that there was plans to help with this and they were optimistic for the future. WHALE Arts Manager, Allan Farmer, explained the terms of the annual report, again highlighting that WHALE has had a very successful year for projects.

“The AGM was a great chance for WHALE staff, Board and stakeholders reflect on the successes of 2013/14 and to look ahead to the future.  We were pleased to welcome Lord Provost Donald Wilson as our Guest Chair and heartened by his recognition of WHALE as a hive of creative and community activity in Wester Hailes.

All members of the board were re-elected and the accounts were presented to the members for approval.