On Saturday 20 June folk from Cassiltoun Housing Association in Castlemilk, Glasgow came to visit Wester Hailes as part of the fortnight of activities supporting the Our Place in Time projects. Cassiltoun have been involved with a project called ACCORD led by Glasgow School of Art which is all about recording heritage assets that mean something to a community. We were keen to share stories with them.

First of all the group visited the totem pole where Mhairi Maxwell from ACCORD, Richard Bolton from Cassiltoun and Peter Matthews from the University of Stirling stopped to take a lot of photos – check back on The Sentinel for a photo story of this. The rest of the group were led on a social history walk around Wester Hailes by local resident and activist Eoghan Howard.

After lunch, all the photos – 307 in total – that had been taken of the totem pole were stitched together by a computer into a 3D model, just like they do CGI in films. Once the model was complete then we had a go at printing it out using a 3D printer. If you want to see more, you can look at the tweets of the day here.

While the printing was happening Richard Bolton of Cassiltoun told us all about the work they do in their woodlands. Castlemilk had been the grounds of a large house, so there is a lot of historic woodland that had been neglected. With support from the Forestry Commission, the community had cleared out the woodlands – included tons of shopping trolleys! Richard was the woodland officer and he now worked to encourage people to use the woodland by doing things like leading walks which ended in tea parties or a full Scottish cooked breakfast cooked over a fire. 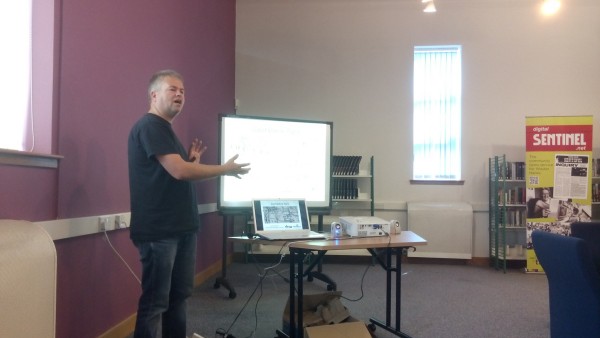 Castlemilk is a little bit older than Wester Hailes, but just like Wester Hailes it had a regeneration partnership. Lots of stories were shared over the day about how both neighbourhoods had changed for better and for worse. Here Jean from Cassiltoun talks about how she enjoyed the day and why sharing this history was important:

If you have Adobe Acrobat Reader on your computer you can download your very own 3D totem pole here (warning – the file is 5MB).

The day was so successful we’re hoping to head over Castlemilk. If you’re interested please let Eoghan or Prospect Community Housing know.