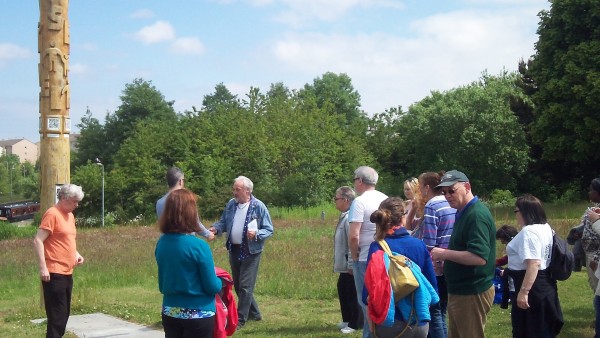 Eoghan leading a social history walk to the Totem Pole

Wester Hailes unveiled its totem pole in December 2012 and the Digital Sentinel recently met with local resident and chair of the Wester Hailes Health Agency, Eoghan Howard to find out a little bit more about how this came about and his role in its creation.

You can listen to the interview with Eoghan here:

If you can’t listen to the interview here is a transcript of what was said:

My name’s Eoghan Howard. I live in Hailesland Park, having lived in Wester Hailes since 1989.

Could you tell me how the idea came about?

It was right back to the very early days of when we came into contact with Dr Chris Speed at Edinburgh College of Art. He had received some money from the Connected Communities program, which is part of the Arts and Humanities Research Council. His project was called Community Hacking 2.0. In the early discussions because the Health Agency were already doing health walks and we were interested in social history it didn’t take much thinking to see a potential link-up between the two so we decided to do a series of social history walks and they would encounter a piece of interactive public art.

Chris Speed was working at the time on a project called Tales Of Things and Electronic Memory which had the acronym TOTEM and so purely in what started off as a joke we said ” Well Chris give us some money for nine totem poles, one for each of the walks,” and Chris said yes.

Of course we quickly discovered that nine totem poles would be incredibly expensive and time-consuming so we narrowed that down to one and that’s the one we currently have down by the canal. The new manager at WHALE Arts, Allan Farmer, his previous posting in Aberdeen had put him in contact with a totem pole up there so two things happened. He had knowledge of totem poles and added to the dynamic of it becoming more real rather than just a fantasy. 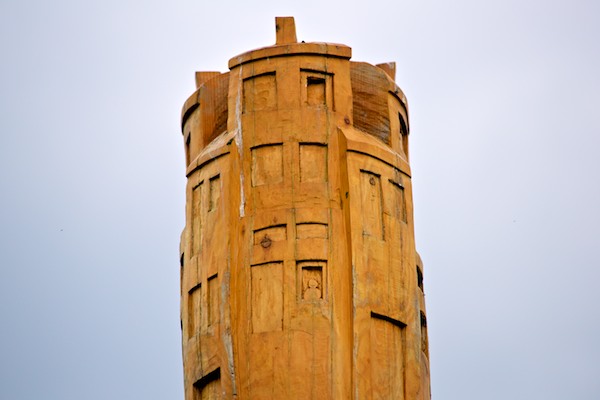 A precarved totem pole an uncarved pole, which was a Douglas Fir I think, was purchased. There was three public consultations exercises where people were asked, older people and younger people at three separate locations were asked what they wanted to see carved on to the pole. Sentinel was one of the things people liked to see and also some of the shapes of the identifying housing. I think it was Clovenstone houses that were used. The Totem Pole was then carved.

Chris Speed had also applied for following on funding from the Connected Communities fund and he called that Ladders to the Cloud and what they allowed us to do was install the pole and low and behold said pole was installed courtesy of Morrisons Construction company. It was officially launched by the Lord Provost Donald Wilson. The pole was different from other totem poles as from the outset it was seen as a Digital totem pole which meant it had five QR codes. What we think is its possibly the worlds first Digital Totem Pole. 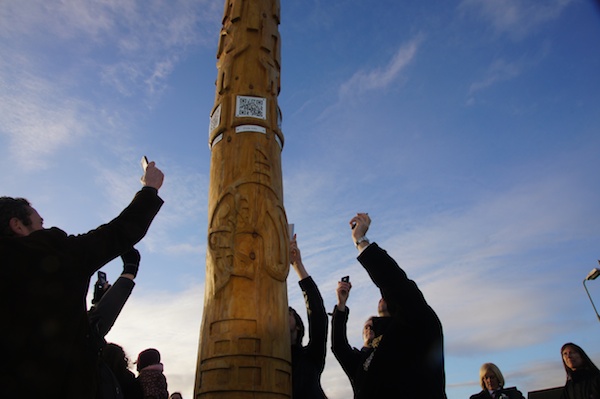 After the consultation which chose which objects should go on it who actually designed the pattern on it?

In practical terms there are people who carve totem poles for a living so we got a totem pole carver. His name was Robin Wood. He started work on the carving based on a selection of ideas that came up in the public consultations. As much as possible the idea was to get people involved. Carving a totem pole is different from coming up with ideas as it involves various dangerous implements like power saws and whatever else is used. Quite often you don’t want to be too close to them. Limbs are very very handy but that said there was at least one person perhaps two who after training assessment and subject to their ability participated in some of the carving they actually helped out with some of the carving. That’s what happened and we now have our lovely totem pole down by the canal.

How long did it take to go from tree to totem pole?

I think from the idea, from the inception that would have been 2011, early 2011 I think maybe March, April to Installation which was December 2012 so that’s about 18 months. Any future poles would be dealt with much quicker. All though we aren’t going to carve the nine poles there is the idea for a second totem pole at the Healthy Living Centre which everyone is now learning would mean that Wester Hailes would have a North pole and a South pole.