Local boxer Lee Redpath hopes to extend his unbeaten streak as he gets a date for his fourth professional fight on December 5 2015 at the Meadowbank Stadium on an MGM Scotland Promotions show.

The previous show on September 5 2015, was the first boxing event held at the historic Meadowbank venue in over three years and the result was a packed house with an incredible atmosphere that meant only one thing – to do it all again. 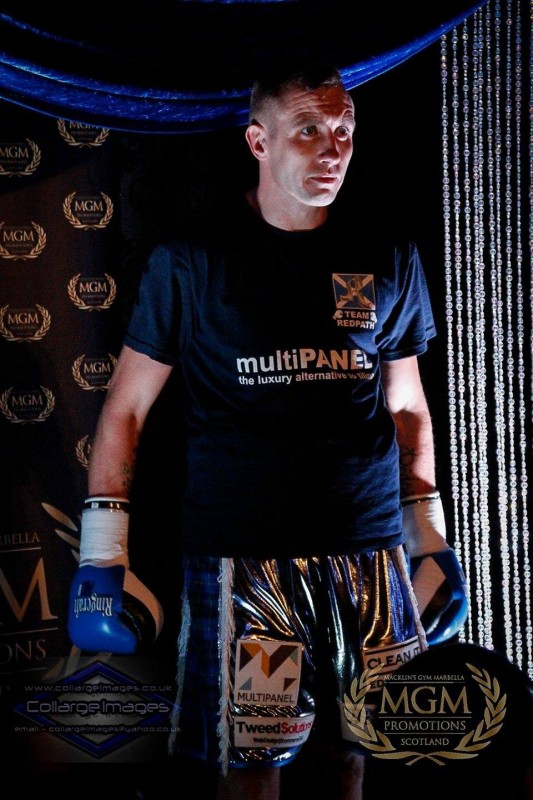 The next event to be hosted at the multi-purpose sports facility on the first weekend of December is set to be staged in a bigger area with more scheduled fights on the bill, featuring local hero Stephen ‘Monster’ Simmons, plus nine unbeaten prospects, and two exciting debutants.

Last show was a big success and it’s set to be a bigger bill this time, I’ve just been told that Stephen Simmons is likely to defend his Celtic belt, there’s more fights and a bigger hall as well. There was 1200 spectators in September’s show and looking to have more this time.

The 33-year-old southpaw defeated 30-year-old Ibrar ‘Smokin’ Riyaz (4-86-3) from Reading in the preceding show held on the first weekend of September in front of his home crowd in a shut-out points victory and is yet to concede a single round to an opponent, so far scalping Kristian Laight (9-182-7), Paul O’Brien (0-2), and Ibrar Ryaz to complete his maiden year in the paid ranks.

I felt good in there, it was the toughest fight I’ve had yet, I hit him with good shots and didn’t bat an eyelid. He was just like a steam train, he just kept coming!

I was pretty happy with the performance overall. My corner Scott Cowen and Ricky Burns’ old coach Billy Nelson were happy, too.

Of his forthcoming fight in the festive season, Redpath stated,

I’ve got no idea on opponent yet, my manager Paul Graham and Sam Kynoch from MGM just want to get me back me out on the show.

I’m definitely looking to push on, like I said before, I want to be active, I’m willing to travel, I’m here and want to stamp my authority.

The Scottish boxer concluded with a message to fans,

I’d like to say to my fans that every time I’m in there, I try my best to pay you back for the support. They work hard for their pay packet and hopefully they continue to support me through for my career.

The main event of the evening will see Edinburgh’s Stephen Simmons (12-1) in a 10-round contest at cruiserweight.

Another 10-round bout will involve super-middleweight prospect David Brophy (14-0-1) from Caldercruix.

The long-awaited pro bow of Commonwealth Games representative and multiple Scottish amateur champion Ross Henderson finally takes place after a couple of false starts. He kicks off with a four-round contest at heavyweight.

You can find out more about Lee and follow his progress as he trains for the new season in his weekly column Redpath’s Corner!

For tickets to the show please visit Ticketmaster