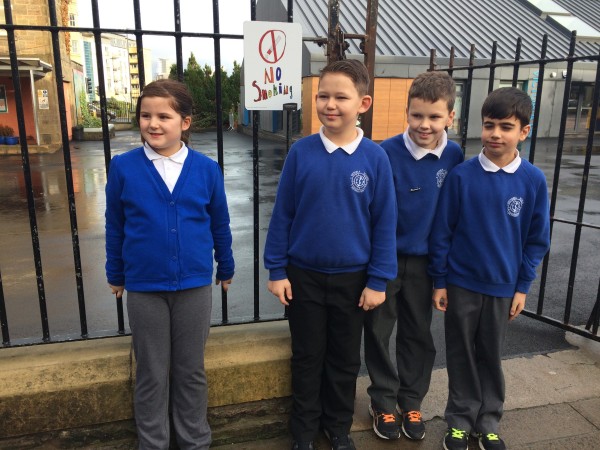 Smoking will no longer be permitted in play parks, car parks and courtyards, as well as in Council premises, as the new Smoke Free Policy comes into force.

The updated policy, which replaces the Council’s Control of Smoking at Work Policy, aims to create a safer, healthier environment.

Under the policy, smoking restrictions have been extended from the workplace and vehicles to surrounding areas for Council properties, including entrances, car parks and playgrounds in addition to other outdoor spaces under the Council’s jurisdiction and used by children, such as play parks.

Today (Wednesday, 2 December), Victoria Primary School pupil Cameron MacPherson, 10, helped launch the new policy with his prize-winning ‘No Smoking’ sign, which has been attached to the railing at his school.

Cameron’s design won a competition run across the city’s schools, and will now be displayed in playgrounds and play parks around Edinburgh to deter smoking.

It is well known that smoking is one of the biggest causes of ill health in Scotland. As a local authority, we recognise our role in helping to achieve Scotland’s smoke-free ambitions set out by the Scottish Government.

The updated policy takes into account the effect passive smoking has on non-smokers, in particular children, who have no choice when it comes to protection from others’ tobacco smoke.

Restrictions will apply to the use of e-cigarettes (vapourisers), which will be treated the same in the same way as cigarettes and other tobacco products.

The policy responds to the Scottish Government’s document ‘Creating a Tobacco-Free Generation – A Tobacco Control Strategy for Scotland’, which calls for Local Authorities to extend smoking restrictions to surrounding grounds and outdoor areas within their jurisdiction, focusing on spaces frequented by children, by 2015.

It is widely recognised that smoking is the largest single cause of serious ill health and premature death in Scotland. Similarly, the effects of people breathing in other people’s smoke – passive smoking – have emerged as an important health concern.

Find out more about the Council’s Smoke Free Policy.