Our newest community reporter Spring Heeled Jack has written a series of short articles which we will share over the next few weeks.

Here is the second instalment of Hard Times

The fight for basic human rights for women began at the start of the 20th century.

For example, the Edwardian era from 1901 followed Queen Victoria’s death, which then put political, economic and social matters firmly into perspective.

At that time it was well to do women who firstly organised public meetings to inform other women of their low status in society and their lack of rights, that this situation was unacceptable and that it should change.

These meetings were well attended and gradually major social issues were discussed and addressed in-depth.

It was the start of a long arduous path for women’s suffrage from 1906 right through to 1926 when all women were finally able to vote.

In the intervening period however conditions were applied such as women being registered as a local government elector, not subject to any ‘legal incapacity’ and they also had to be over 30 years of age before given the right to vote.

However, these conditions still left 22% of women over thirty remaining disenfranchised from the parliamentary elections.

World War 1 also caused mayhem where women were largely sidelined in British society by the state system and the war.

Meanwhile, countless men came back to their families broken in health both during and after the war, where women had to deal with these significant problems.

Another important problem was that of a married man being killed during the war, where a wife was not then entitled to a state pension in Great Britain.

People can well remember and observe today by the means of several documentary films, which outlined the struggle between the state who wanted to remain the status quo and women who were frequently imprisoned during their fight for equal voting and pension rights. 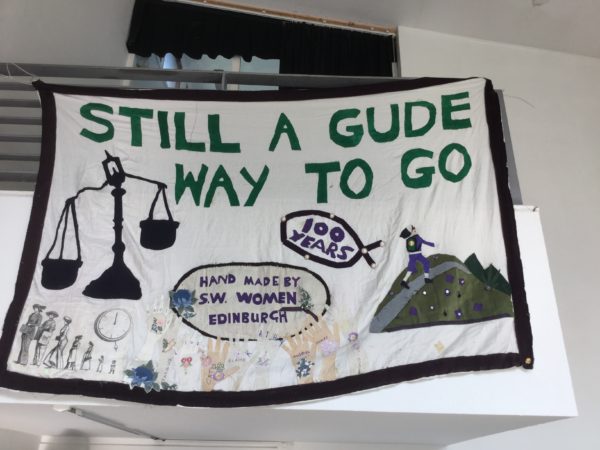 A banner made by local textile group Stitch ‘n’ Time commemorating the work of the Suffrage movement.

Women were at that time frequently force fed in prison if and when they went on hunger strike whilst pursuing their human rights.

This actually meant women being fed through a nasal-gastric tube, which would be regarded as a form of torture today.

However, this was the extent that the suffragette movement had to go in order to achieve their objectives.

It should be noted that many right thinking men agreed with the ideals of the suffragettes, they attended public meetings and supported women’s long fight then for what would be termed basic human rights today.

This was a long campaign that eventually resulted in triumph for the suffragette movement, but it often led to many women paying a very high price when fighting for their rights.

The opinions expressed in this article are those of the author and not the Digital Sentinel.