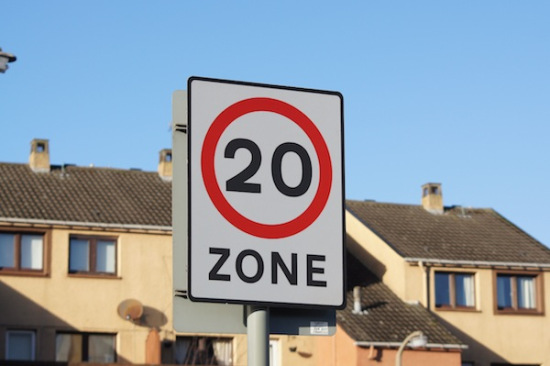 Police Scotland and Sustrans Scotland joined the City of Edinburgh Council’s Transport Convener today to mark the launch of the first zone in the Capital’s new 20mph limit rollout.

Phase 1 of the rollout of a 20mph speed limit on all residential, shopping and city centre streets in the Capital goes live on Sunday 31 July 2016, when a Traffic Regulation Order formalising the reduction in the speed limit comes into force.

In becoming Scotland’s first 20mph city, Edinburgh follows a growing number of European and UK cities in introducing slower speeds.  The project extends 20mph speed limits  to approximately 80% of Edinburgh’s streets and there is strong support from city residents for the move.

The new speed limits are aimed at increasing safety for all road users as well as creating a calmer, more people-friendly environment in shopping and residential streets. A network of key arterial roads across the city will be retained at 30mph and 40mph.

The reduced speed makes it easier to cross roads, particularly for children and older people.

In preparation for the ‘go live’ on Sunday 31 July, large 20mph signs have been erected in Zone 1 over the past few weeks, marking the entrance and exit of a 20mph area where the speed limit is changing. These are supplemented by smaller repeater signs or road markings with speed limit roundels.

Slower speeds bring many benefits to the urban environment, making streets more people-friendly, promoting active travel (and thereby improving public health) and reducing the risk and severity of road collisions. The majority of Edinburgh residents support our 20mph scheme and we know that other local authorities in the rest of Scotland are closely monitoring our experience.

We’ve been working towards this rollout for a number of years now and I’m delighted to see the first phase going live. Changing driver behaviour is not an overnight thing, obviously, and it will take a bit of time for it to become second nature. Experience here from our South Edinburgh pilot and from schemes elsewhere shows that support for 20mph increases after implementation as people welcome the benefits.

We’ll continue to help people adapt to the new limit throughout the rollout, through awareness raising and education campaigns.

We remain committed to casualty reduction on our roads and whenever we observe motorists disobeying the 20mph speed limit, or where the public tell us there is an ongoing problem, we will respond appropriately.

Changes to road layouts, proper signage and continued engagement with the public are the keys to ensuring the speed limit is adhered to, however, police will give due attention to areas around schools to ensure public safety.

Around 50% of Edinburgh’s streets already have a 20mph limit. The project extends the 20mph speed limit to the city centre, main shopping streets, residential areas and areas with high levels of pedestrian and/or cyclist activity. Streets that do not fall within these categories will generally have a speed limit of 30 mph and 40mph.

The rollout of 20mph speed limits across Edinburgh will be carried out in phases as follows: