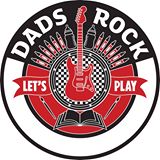 Dads do indeed rock, as the local charity that runs free playgroups for dads and children has just won twice at the international ‘what’s on 4 junior’ awards.

These awards follow on the heels of their 2013 award from MADE magazine, when they won the parent’s choice Award.

Dads Rock was set up by two local dads, as they found that dads and male carers can often be excluded or marginalised from other early years settings.  Dads Rock playgroups aim to be a fun, positive and rocking place for dads and children to come and play and learn together.

The playgroups are based in Granton and Wester Hailes, and give dads and their children invaluable 1:1 time, there is free play, including instruments, a healthy snack, story and song time.

Thomas Lynch, co-founder said this:- ‘It’s amazing to have won against such tough competition and is a real boost to us.’

Dads Rock are also excited to confirm expansion to their weekly playgroups.  From 28 July 2014 they will be running groups from their existing locations every Monday and Wednesday.

The weekday groups will also be free and run from 10-11am.  David Marshall, co-founder said:- ‘We’re looking forward to bringing the ROCK during the week! giving dads and kids more chances to come together and have some fun.’