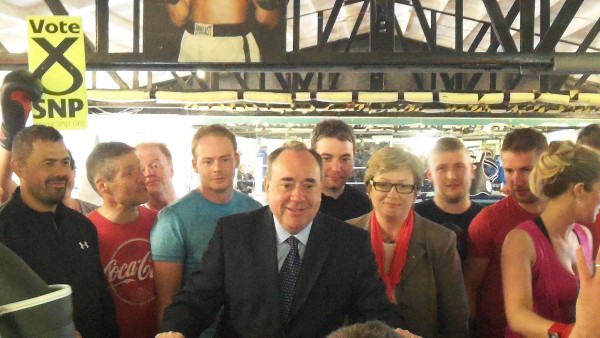 Alex Salmond, the former First Minister of Scotland, took a break from campaigning in Gordon today to pay a visit to Clovenstone Boxing Club to support Joanna Cherry’s campaign to become the next MP for Edinburgh South West.

Mr Salmond arrived around 2.30pm and met with the founder of  the boxing club Rab Mcewan and his son, professional boxer and Manchester Commonwealth Games medal winner Craig Mcewan. The former First Minister met with many SNP supporters posing for photographs before giving a short speech.

I’d like to thank everyone for their hospitality today. This is only the second speech I’ve made from inside a boxing ring and the other one I was giving out medals.

Right across Scotland there is a move towards the SNP, towards giving Scotland a say, toward making Scotland matter. There is a growing mood that something sensational, something amazing is going to happen. Let’s call it a knockout of the Labour Party in Scotland.

We are fortunate we have a range of fanstastic candidates, spectacular candidates who are getting into politics for the first time. Who will talk this country up rather than put it down like the former member of parliament for this constituency. Foremost amongst the new stars we’ve got, the people who are coming into politics is this woman here.

Thanks you very much indeed. I’m so delighted that Alex would come here today to this community that has given me so much support since I was chosen as the candidate.

I know many of you have been working hard on the campaign out leafleting in all weathers, standing on street stalls, canvassing and giving your all to it.

I know many of you are working people and you give up your free time and I really really appreciate that. With hard work and determination we can win this seat so that the next time I visit this gym it will be as MP for Edinburgh South West.