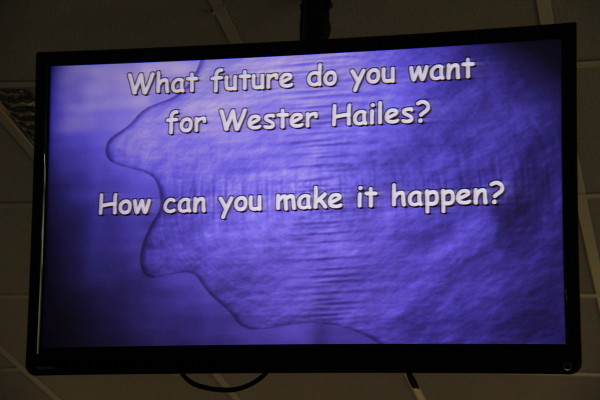 A Wester Hailes Open Space event took place today, 25 April 2015. The event, held at the Open Heavens church ran from 10.00am to 4.00pm and invited local people to come along, raise the issues that matter to them and to create a plan of action to combat them.

The Digital Sentinel was there to capture some of the main topics discussed and actions suggested that include:

Making Wester Hailes a safer place, the community thought that teaching people the importance of reporting crimes and how it can help, also they suggested the creation of a Wester Hailes crime stoppers service to make a more local and informal way to combat crime.

Improved transport links with a possible bus service to Livingston, the community plan of action was to contact the transport minister with his contact details being provided by local councillors.

How they would inform people of the event and improving IT skills. The community agreed that an update of the event and the actions taken from it would appear on the Digital Sentinel and suggested they get in touch with Napier University about trying to organise students to teach IT classes tin the library and primary schools

The creation of centrally located community spaces. They agreed that there was some community areas in the neighbourhoods but thought they should provide activities that young people wanted, maybe targeting specific influential young people to encourage people to go along. They also suggested that the organisations carry out street work to let people know what they were doing.

The event was thought by all who attended to be a success and everyone agreed that there was a lot of interesting discussion and looked forward to helping take forward the agreed actions.

Detailed information on everything that was discussed and agreed by the community will be available soon.  Sign up for our daily email update to make sure you don’t miss out.