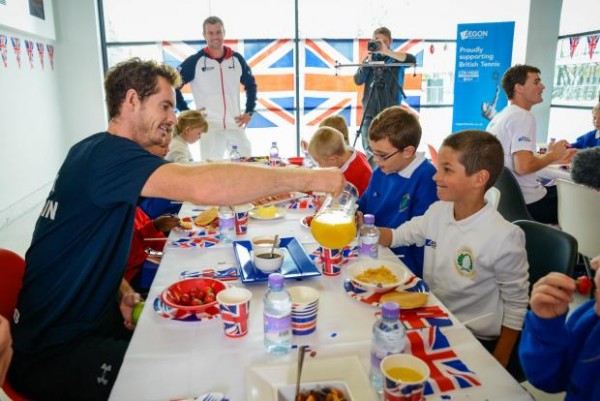 A group of children from Clovenstone Primary School have been served brunch by Andy Murray and his Davis Cup team-mates during a trip to Glasgow.

The children watched a practice session at the Emirates Arena in Glasgow but were treated to a surprise afterwards when the tennis stars served up a feast including pancakes, cereals and fresh fruit.

Around 20 children from Clovenstone Primary School in Edinburgh tucked into the brunch with the British team who are aiming to reach a first Davis Cup final since 1978 and start the three-day tie with Australia on Friday.

There is nothing more important than a healthy start to the day, a lot of thought goes into what the team eats.

It’s great we were able to give something back and talk to the children about healthy eating and get them excited about the upcoming tie. I hope we’ll be able to give them something to cheer about this weekend with a win against Australia.

The event was arranged by Aegon, who sponsor both the British team and a breakfast club initiative for schoolchildren across the Scottish capital.

Aegon breakfast club gives school children in Edinburgh a great start to their day by providing a free healthy, breakfast for those who need it most.

They’ve proven to be a good way to improve attendance and concentration, as well as social skills and help children get into good eating habits early on in life.