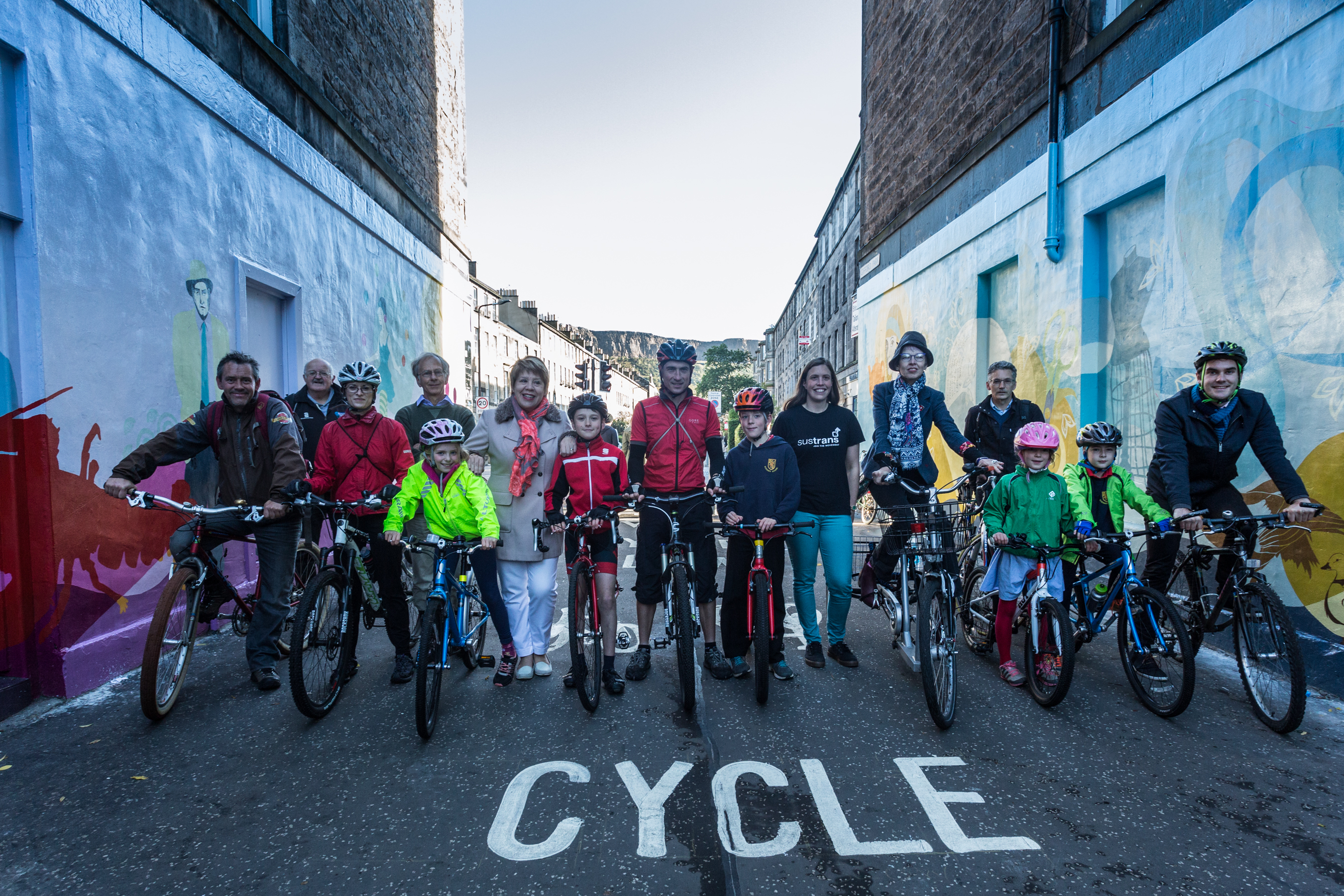 A new cycle route connecting the Meadows and the east of Edinburgh was officially opened today, Thursday, 8 October.

The Meadows to Innocent route forms the first phase of a £1.25m scheme to link the Innocent Path to the Union Canal towpath via the Meadows.

The new section allows cyclists to travel along National Cycle Network Route 1 between North Meadow Walk and the Innocent Path, which follows an old railway route to Duddingston, Brunstane and Musselburgh, without having to dismount at Clerk Street.

It is also an important milestone in the delivery of the Council’s QuietRoutes project, a network of cycle routes aiming to cater for new or less confident cyclists.

Today, Edinburgh’s Transport Convener and Vice Convener were joined by representatives from Sustrans Scotland, Spokes and the local community at the Gifford Park section of the cycle path. Here the project has opened up an alleyway to create a welcoming route complemented by two community murals. These were initiated by resident Hilary McDowell along with the Southside Association and were created by Edinburgh artist, Kate George, with the assistance of the public.

It’s great to be able to officially open this new route, which provides an essential link for cyclists travelling across the south of Edinburgh, and is aimed at encouraging families and less confident cyclists to have a go.

This is one of many exciting cycling projects to come to completion this year, and I look forward to seeing the network grow as we continue to invest in cycling infrastructure.

The new addition is one of a number of cycle ways in development across Edinburgh, adding to a growing network of routes spanning the city.

Funding for the £1.25m Innocent Path to Union Canal project comes from both the Council and Sustrans Scotland, who have contributed £500,000.

This new route is a key link in Edinburgh’s walking and cycling network and the National Cycle Network. It provides a safe and attractive route for people to make everyday journeys by foot and bike.

There are reassuring signs that good progress is being made to increase cycling in the capital, with the latest figures suggesting that the City of Edinburgh Council is leading Scotland in terms of cycle-commutes. This new route – and others in the future – will allow Edinburgh to continue this momentum.

Other projects underway or planned for the near future include a new walking and cycling route between Loanhead and Gilmerton and a cycle route from Roseburn Path to Leith Walk via George Street, which is currently under development.

Today also marks the launch of a series of led cycle rides around the city run by the Bike Station and MY Adventure. These have been made possible with funding from the Scottish Government’s Smarter Choices, Smarter Places programme, which aims to encourage people to choose sustainable transport over the car.

Find more details on cycling and walking projects in Edinburgh.​