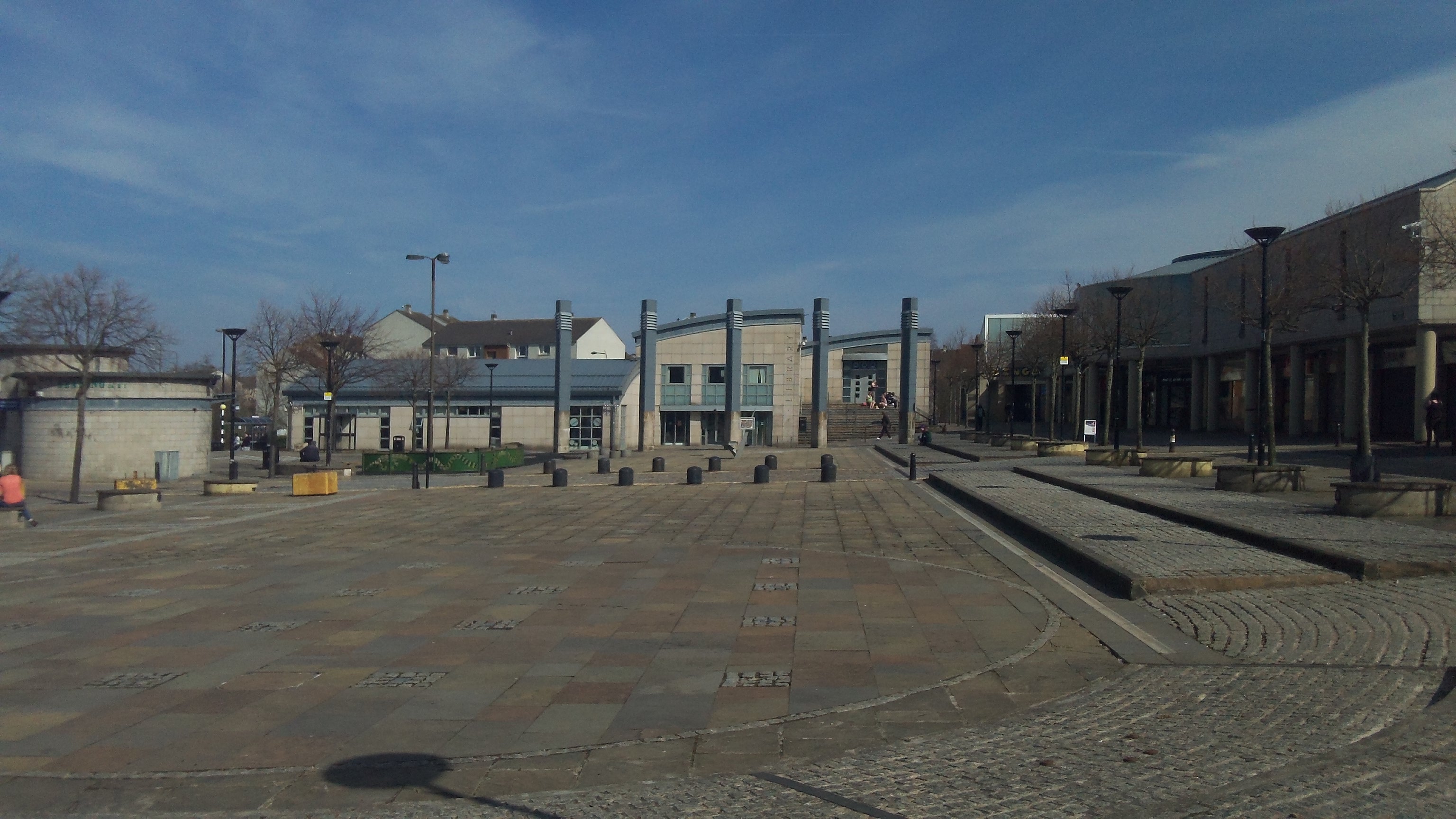 Unfortunately, local MSP Gordon Macdonald and councillors Catherine Fullerton, Ricky Henderson, Bill Henderson, Dennis Dixon and Lord Provost Donald Wilson were not in attendance and there was no police there to give a report. However, this did not stop several local issues being discussed.

In regards to matters arising from the previous meeting’s minutes Sean Bell mentioned that the Hunter Foundation board had indicated that they were willing to grant funding to create a community fund and that there will be a meeting in the future to discuss how to proceed.

A brief treasurers report was given by Kasia Banaszewska-Diaz, secretary for Wester Hailes Community Council as the treasurer Maud Wylie was unable to attend, stating that the budget for the Community Council was £2704 with £45 in petty cash. 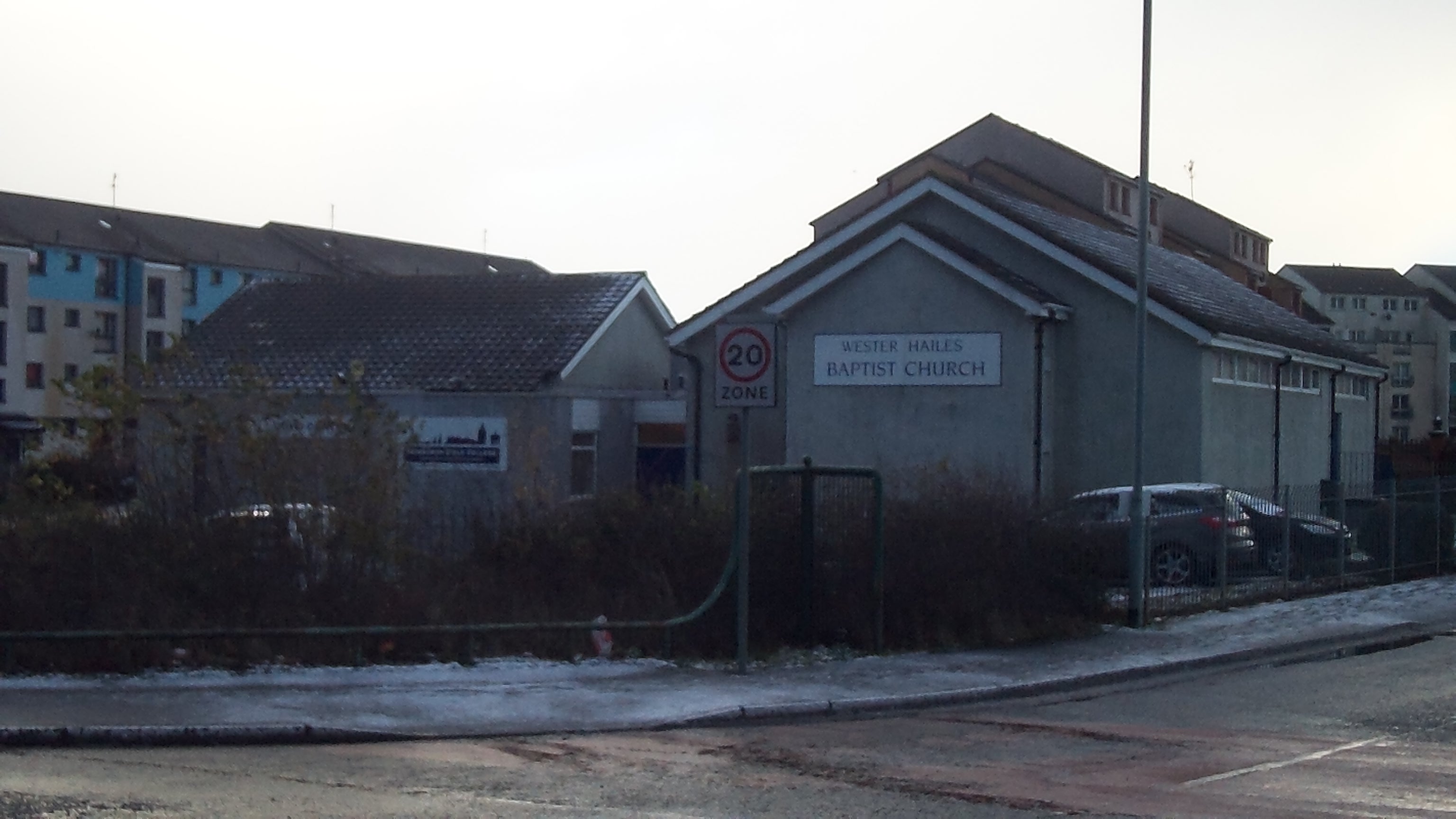 John Aitchison, Chair of the Community Council, and Colin Cooper, who are both members of the Dove Centre board then gave a presentation on a proposed extension to the Wester Hailes Baptist Church where the Dove Centre is based which is experiencing difficulties.

The church is hoping to build a £1.3 million extension as currently there is not enough room for both the church and the Dove Centre. The church hopes that this new extension would not only provide the Dove Centre with more room but would also leave a hall which could be used by the community and youth projects. However, in order to build the extension they would need to acquire the land adjacent to the Church which currently holds a path, have a look at the plans below for a better look. 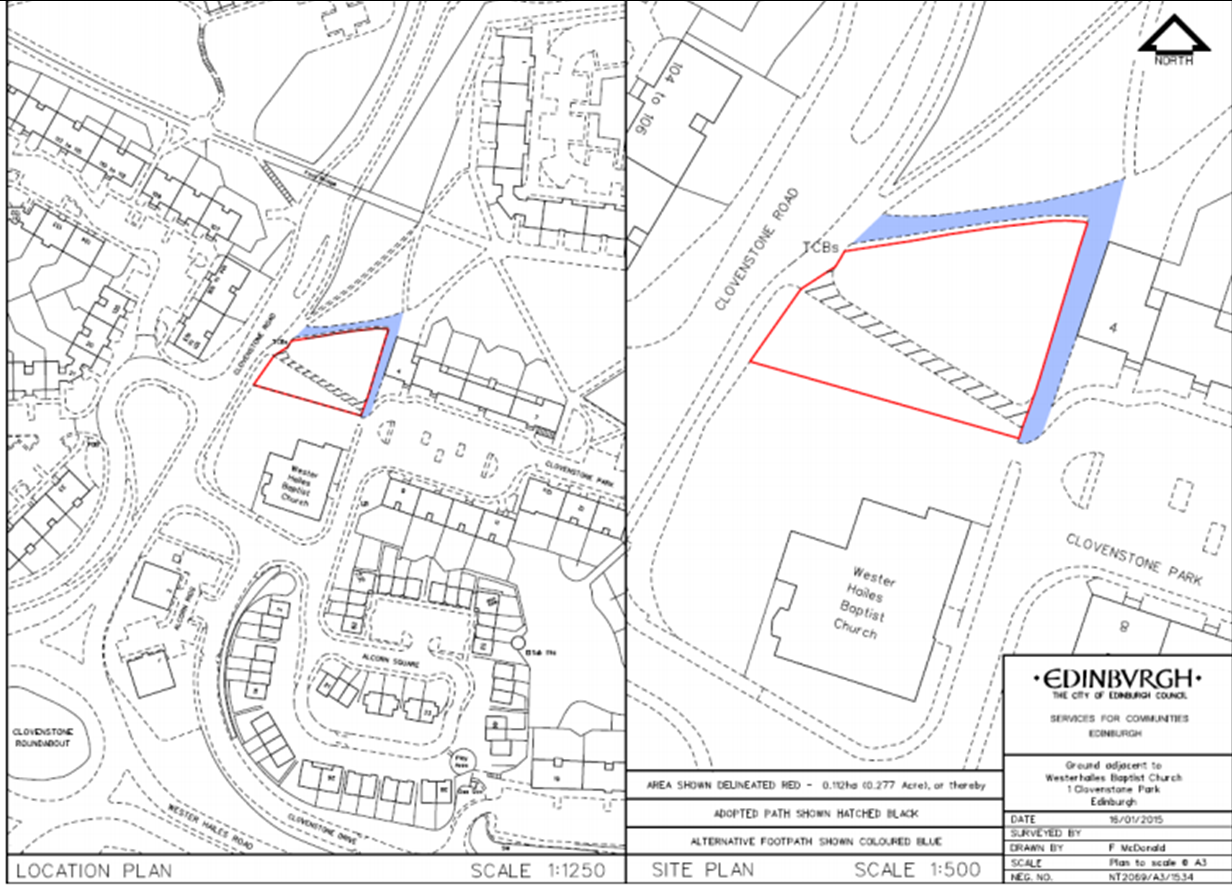 Plans for the extension discussed by Edinburgh Council, June 2015

The problem is the Church is not willing to pay the price that the Council is asking for the purchase of the land. The 1120 square metres of land has been valued by the Council at £65,000 and after a meeting they agreed to support the extension and sell the land at a reduced rate. Colin Cooper who is on the board of the Dove mentioned that he believed the price of the land given to the church was somewhere between £30,000 – £40,000.

The money that the Church has been granted is only available until 21 November 2015 and that if no progress is made and the church is unable to acquire the land then the extension would not be able to go ahead.

There was some discussion around this with one member of the Community Council asking why they were only hearing about the difficulties with the extension now. It was also added that the Council would be unlikely to give the land to the Church for free (one the outcomes suggested by John that the Community Council fight for) as it could set a precedent and other groups across the city would start asking for more land. There was also a question asked if the Council is legally able to give the land away at no cost.

It was agreed that the Community Council would give their support to the Church in their pursuit of the land and it was suggested that a subgroup be formed for this goal working with advice from Sean Bell the Children’s Practice Team Manager for South West Edinburgh. 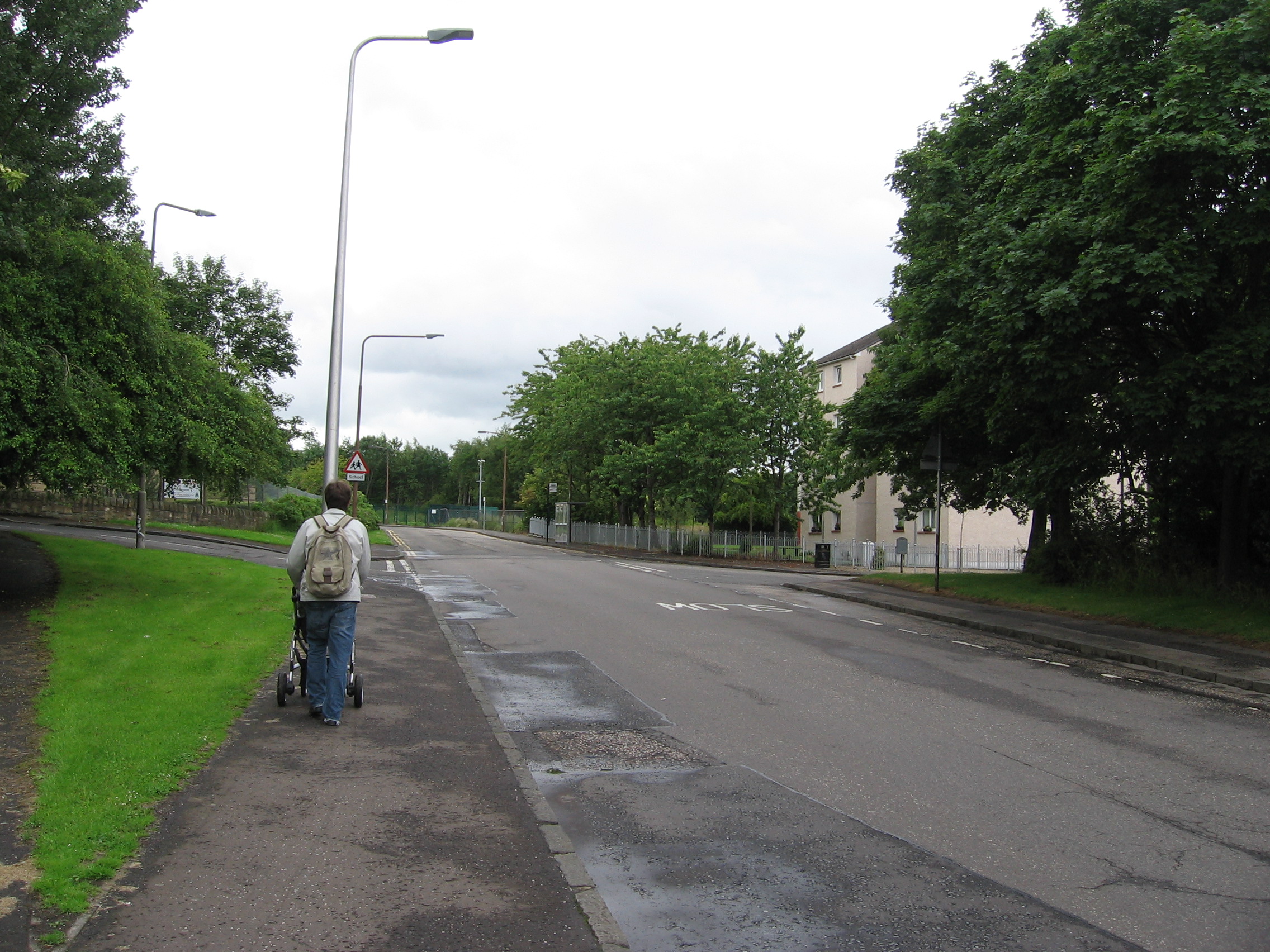 After there was a presentation by Serge Cornu a local resident who recently urged a call to action to try to get more pedestrian crossings along Dumbryden Drive. He explained that currently there is only one crossing along Dumbryden Drive, which is a pedestrian island. He feels that if he wants to visit the park with his young child there is no safe place to cross. He added that where he is from in France there is a crossing at every junction and that he had been out canvassing Dumbryden residents and of the few he had been able to reach he had received over a dozen.

Stewart Farquhar an environment manager for Edinburgh Council was there to respond to some of Serge concerns, he commented that the Council uses a survey on streets counting  the number of pedestrians and cars at peak hours and uses this to decide which streets get a crossing. He commented that a survey had been carried out on the middle of Dumbryden Drive and that there was not enough traffic for a crossing. He added that a survey was planned for the junction with Dumbryden Drive and Murrayburn Road but they will not know the results until the  new year.

The Community Council replied to Serge that the City could not have a crossing at every junction as there is already traffic problems. However, they did mention that with the speed limit changing to 20mph under new plans to make the City safer for pedestrians this could make it safer to cross Dumbryden Drive. After a vote the Community Council agreed that they would wait until the speed limit change was in place and they heard the results of the survey mentioned by Stewart Farquhar, before they would proceed with trying to pressure the Council to add a crossing.

There was also a brief discussion on the current ward boundary changes proposed by the Local Government Boundary Commission for Scotland which would see the majority of Wester Hailes joining the Pentland Hills ward. They commented that Wester Hailes is already split and that they already have to deal with problems over being split between two boundaries. They commented that it would have been good for Councillors to be at the meeting to explain some of the changes and that they feel that the consultation should have been brought to their attention much sooner. They urged people to have a look at the consultation and share their views. 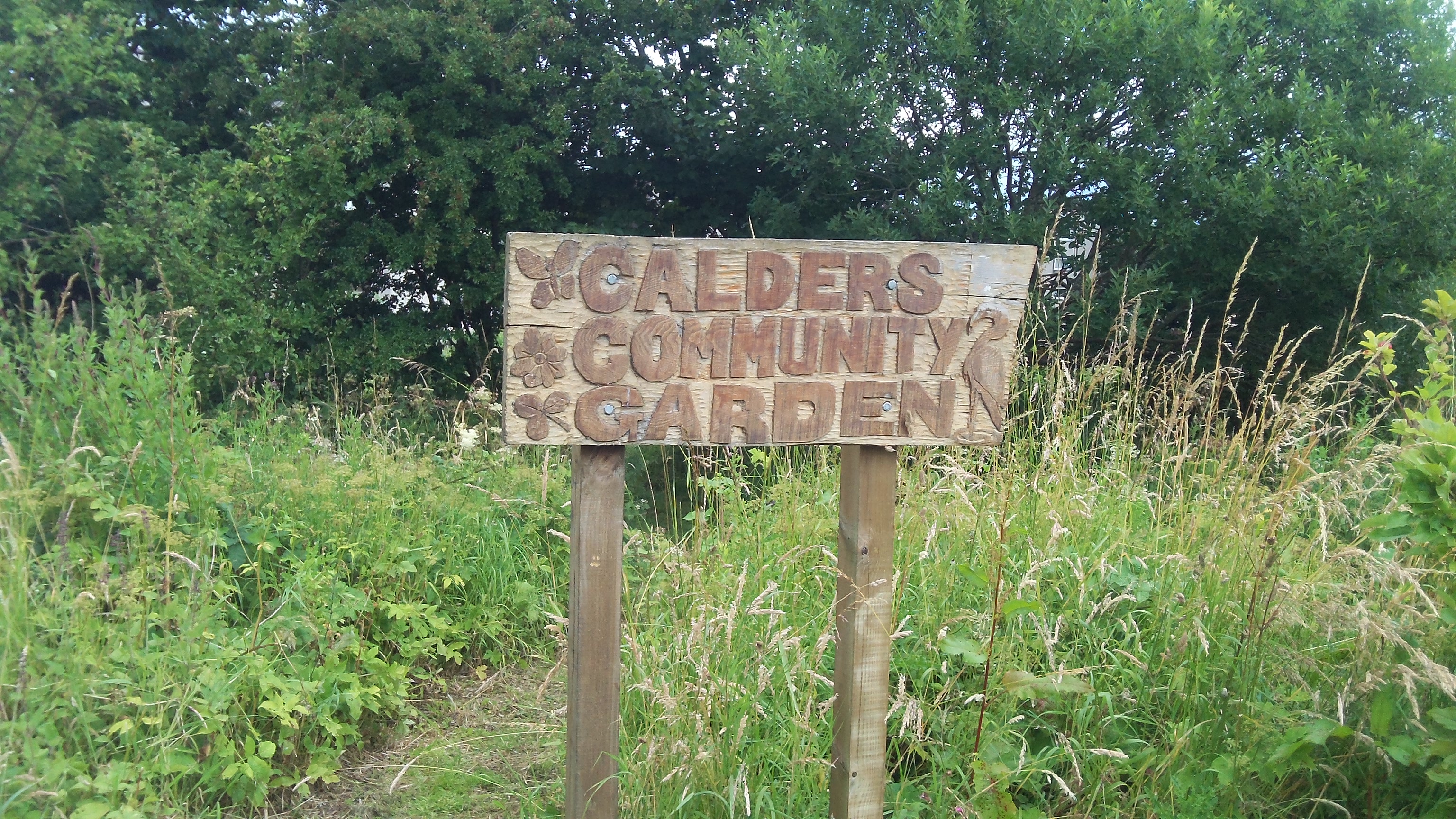 Finally the Community Council proposed plans for a subgroup to meet in the coming weeks to discuss a possible litter pick and other actions that can be taken after the recent Open Space Follow-up event.