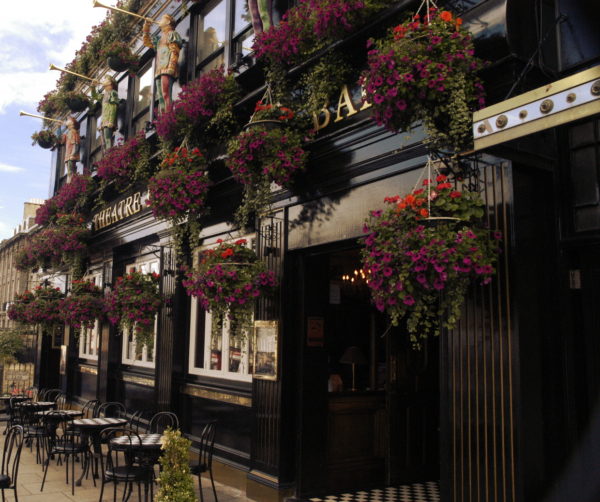 We have had a review sent into us by one of our community reporters of the Theatre Royal bar on Greenside Place. Have a look below to give it a read!

The THEATRE ROYAL wine bar & bistro on Greenside Place next to the PLAYHOUSE is a good place to eat after shopping at the John Lewis store or before going to a show at the Playhouse (however it is frantically busy after 5.00pm). The Royal has a well-appointed dining area to the rear with large windows overlooking Calton Hill (most taverns have no windows at all or no view). You sit at bistro style tables or comfy leather wall sofas near the Victorian-style quadrangle Bar with its thicket of barley-sugar pillars and well-stocked gantry. The walls are festooned with posters of past Playhouse shows including interesting Music Hall handbills. A shelf proffers a selection of the daily newspapers, adding to the mellow environment.

The other day I selected haddock & chips with mushy peas which arrived within 20 minutes. It was mid-afternoon so there were few diners. My big well-warmed plate offered a large fillet of haddock encased in an envelope of puffy crisp golden batter which melted in the mouth. The thick slab of fish inside was meaty, moist and sweet, not dry and overcooked as you will get in a fish and chip shop (where the batter will be as hard as concrete). The wee bowl of mushy peas (famously mistaken for Guacamole by Lord Mandelson) was not the bright green which I like but it tasted fine. I think I will choose garden peas the next time. The chips were chunky and toothsome and not greasy. A generous helping of tartare sauce in a ramekin and a juicy wedge of lemon completed the garnishes.

This version of haddock & chips succeeded on all counts for me – it was piping hot, made from fresh ingredients and free from grease. The large portion of fish was filling and satisfying – definitely man-sized. The meal was helped on its way with a glass of Deuchar’s I.P.A (brewed in Slateford). I also felt that the mellow surroundings calmed my nerves and aided the digestion of this homely meal.

If you have recently seen a film, play, TV show, read an interesting book or even had a good meal and are interested in writing a review, we want you!

For more information you can contact us on digitalsentinel@whalearts.co.uk,0131 458 3267 or popping in to one of our weekly IT drop-in sessions!