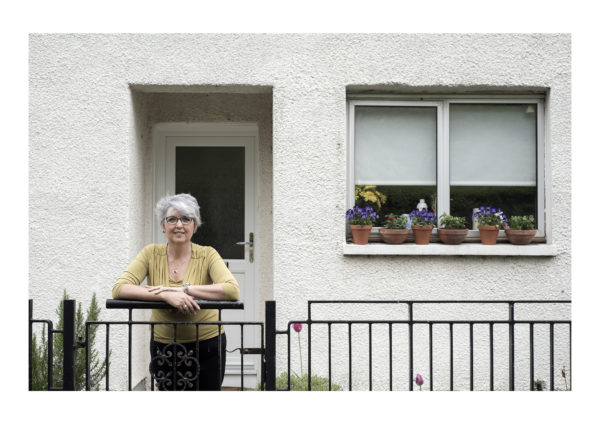 My name is Fiona Glasgow and I came to live in Clovenstone, for the first time when I was seven years old. I’m now fifty and have just returned.

So how long have you lived in Clovenstone overall?

So the house I’m in at the moment is the family home. So this is where we moved to. I stayed here from when I was seven to when I was twenty-two. I moved away but I still worked in the local area. I then moved to Glasgow and I’m only just back so that works out to only fifteen years I lived here but in fact my Mum and Dad lived here the whole time so it’s always been my home and I’ve always visited on a regular basis, so it feels like forty-three years.

How has the area changed since you moved?

Well it has changed, we used to have a view of the castle from out upstairs window and outside the kitchen window there was a big field that we used to play in and now its covered in houses. It used to be that there were flats and now its lots of nice houses, so that’s different. When I was a kid there used to be a wee joke going about for the number of parking spaces. When they designed Clovenstone I think they had two spaces for every house or it looked like that. Of course very few people had cars, so Dad was never stuck for somewhere to park some of his different and unusual cars he had over the years.

Do you feel like there’s been a change in the community at all?

There is a difference in the community. Partly because there is a difference in the society we live in anyway. When I lived here as a kid, being brought up here as a teenager, first of all there was very little, then obviously things happened. We got a Community Centre and a school, we had cultural exchanges, all those kind of things happened. Then I moved away from home but I was still involved in the community.

I think the biggest change is the mix of people. When we first lived here it was mostly working class families who didn’t have a lot of money and were I suppose moved here because it seemed like a better place to live than where these people had come from.

Do you feel that the area has improved?

Yes. I mean in the way that it looks, certainly and I like the diversity. I like that there are people walking past. That’s a big change people walk past our house now on a regular basis. Its really really busy. We never used to see people, now when I look out there are people of all different shapes, sizes and colours which makes for an interesting experience. I find that really nice.

Certainly one of the things I enjoy here as well is if I get on a bus there’s nearly always someone that I recognise or someone from the past that I’ve met when I was a kid. That’s really nice I quite like that.

There is lots of people that have been around for a long time and its quite weird even older people who, obviously now that I’m a bit older, you would think would change quite massively but they’ve not really. I still recognise them and that’s nice. You go to the corner shop and its still the same man who works in the corner shop who’s been there for many many years and I’m sure he should have retired a long time ago.

I used to work in the Wester Hailes Opportunity Trust when it first opened. That was a project set up to help people with training and employment. So helping people get on to courses, set themselves up for interviews. There was also a business start up part of it, little training courses on travel and tourism which I had the joy of being part of. It was really nice, it was a community based project, employed local people and it was around for a long time. It used to be right at the front of the shopping centre.