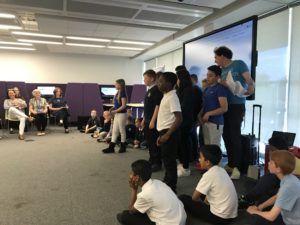 Canal View Primary pupils recently took part in a project that brings composers and scientists together, creating new music and showing that science is for everyone.

Primary 6 pupils wrote and recorded three new compositions called ”Toxic Orchestra”, which relates to Dr Pam Cameron’s work on E. coli O157:H7, ”Physics is for me”, which describes the work of Marion Ross and ”The Vet’s Song”, which tells the tale of Prof Andrea Nolan’s work into finding pain relief for animals.

The pupils’ songs have been included in a new website  and will feature in a new Edinburgh Festival Fringe Show this August. As part of the project, pupils will receive free tickets to this show, on a school day, and the school will have the opportunity to take part in more science workshops.

The enthusiasm of Canal View pupils and teachers was infectious and the community is incredibly lucky (in my humble opinion) to have such a wonderful school and such polite, intelligent pupils. Currie Primary School were the only other school who showed an interest in being involved and they will also receive free tickets to the show and some science workshops.