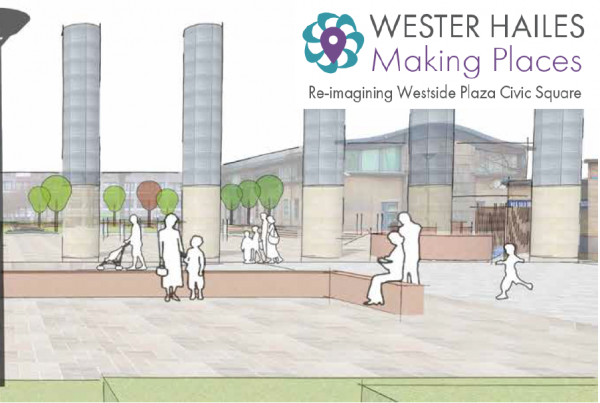 The report which details plans of how the square located at the front of Westside Plaza could be come a truly civic place includes a community green space, a market area and an outdoor performance area outside Wester Hailes library.

The report has been created using feedback received over several months of community consultation where the Wester Hailes Community Trust and Harrison Stevens asked local service users, young people, local groups and businesses what changes they would like to see to make the square into a civic space they would like to spend time in.

The Trust hope that the project report will be used as a plan for future developments at the Plaza with the hope that it will be used to develop the Locality Improvement Plan. The first construction works will take place in the coming months after the City of Edinburgh Council secured funding to replace the paving.

For many Wester Hailes people, this will be the second time they have seen major improvements proposed for what is now known as the Westside Plaza, with the first being implemented at great expense in 1996 but quickly deteriorating through a lack of continued maintenance. This time though, the intensive community consultation carried out, combined with the experience gained through the disappointments of the first attempt, should enable local residents to create a fully functional and widely used town centre to be proud of for many years to come.

The report produced by HarrisonStevens on behalf of the Wester Hailes Community Trust is a great step forward in this regard and hopefully as many local people as possible can see a full copy of this at various local organisations or online. The ongoing support provided by Edinburgh Council from the outset has also been much appreciated and will greatly help turn many of the exciting ideas raised during the consultation stage into reality

The Making Places project is funded by the Scottish Government’s Making Places initiative. Please find an embedded version of the report below, you can see a physical copy at WHALE Arts, Prospect Community Housing and Wester Hailes library.