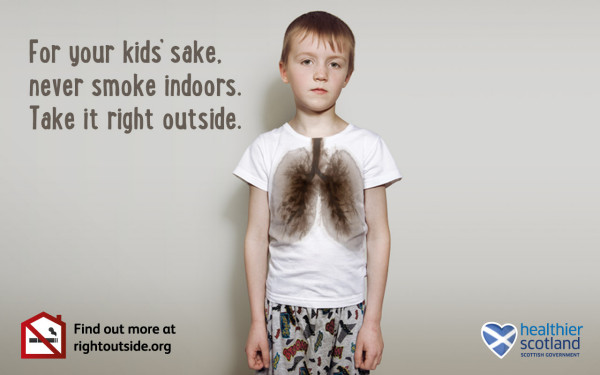 A new campaign is being launched to urge parents to take smoking right outside, as statistics reveal that 11 per cent of children in Scotland are still being exposed to second-hand smoke within the home.

With the effects of second-hand smoke having serious consequences for a child’s health, Public Health Minister Maureen Watt today highlighted that it is never safe to smoke in the home or car as the next phase of the Take it Right Outside campaign got underway.

In 2014, the Scottish Government announced a new target of reducing the proportion of children being exposed to second-hand smoke from 12 per cent to 6 per cent by 2020 – which would have the potential to protect up to 50,000 children.

The campaign is designed to help move Scotland towards achieving this target, by highlighting the facts to those who think they are doing enough to protect their children and signposting the steps they can take to make their car and home smoke-free.

Because 85 per cent of all second-hand smoke is invisible and odourless, many do not realise that the harmful chemicals are still waiting for children when they come in from playing or school.

Research to support the campaign highlighted that many still think smoking in one room or leaving the door or window open is enough to protect their children, unaware that the second-hand smoke lingers and can move from room to room long after people think the smoke has gone.

We want every child in Scotland to breathe clean air when they’re in the home or the car.

Children breathe faster than adults, and therefore breathe in more of the harmful chemicals contained in second-hand smoke. This campaign is about making sure people are aware that smoking in one room, or at an open window or back door, isn’t enough to protect them due to the fact that second-hand smoke lingers for up to five hours.

The only way to ensure that a home is smoke-free is to never smoke indoors.

We understand that everyone’s situation is different, but there are small changes parents can make to their smoking behaviour which will pay dividends in terms of protecting their children from second-hand smoke.

Everybody knows that cigarette smoke is harmful. What we don’t all know is that more than 85 per cent of smoke is invisible and has no smell. Parents want to do the right thing to protect their children, but not enough people know just how dangerous second-hand smoke is, or that it can hang around a room invisibly for up to five hours.

We have to change that so we can protect the next generation from the harmful effects.

For help and advice on how to take smoking right outside, visit www.rightoutside.org