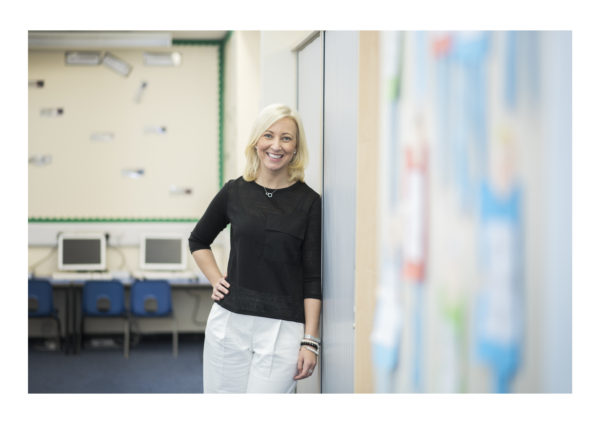 Below are the photographs and interview with Jennifer Cairns who speaks about her new role as headteacher of Clovenstone Primary School, some of the activities the school has been part of and its links in the community.

You can listen to the interview with Jennifer here:

My name’s Jennifer Cairns and I’m the headteacher at Clovenstone Primary School.

How long have you been headteacher?

I’ve only been here a short while since, just the beginning of February really. So still very new and getting my head around everything.

Where did you come from before?

I’ve been in Glasgow the last thirteen years working in various schools for the authority. Its a lot of change.

How have you found coming over to Clovenstone?

It’s been great actually. The school its self is very well established in the community and I’ve been really impressed with all the community work that goes on with the community centre, the boxing club and the links with the high school, with WHEC, have been excellent. There is a lot of involvement.

We also have links with Edible Estates who come and work a couple of time a week with our children, going into the garden and nature walks and such likes. It’s a lovely area for that as well with the canal. They were out on Wednesday just there actually, away down to the canal because it was such lovely weather. They work in the garden sowing French beans recently as well. Its always quite a highlight and its nice for the children to get out. It’s good to get children outdoors and to access the natural environment.

Is there any projects going on just now that you are particularly proud of?

Aegon are our sponsors, they are our charity partners and we are looking to develop some of the grounds in the near future, the area just outside the front entrance. We are hoping to work in partnership with parents for that to develop a sort of learning area outside, a kind of outdoor classroom. It could be used by the local community as well.

We recently went to the Assembly Rooms as part of a whole city glee competition. The  Glee club which was primary 3 to 7 children were able to perform on stage at the Assembly Rooms on George Street. In front of quite a crowd with parents and other schools across the city. Unfortunately we didn’t get through but it was a great experience for them as well. They did two songs, they did the American Authors’ ‘Best Day of My Life’ and Cindy Lauper’s ‘True Colours’. I’m sure Ms Coyle hears those songs in her sleep! They also did a performance for the school assembly as well. It’s great so we are going to try again next year to get through.

We are trying to get our Parent Council up and running, we don’t have many member as yet, and see what that can bring to the school and the community as well.

The school is one of eight schools in Edinburgh which is part of the First Minister’s Scottish Attainment challenge. Out of the eighty-eight schools in Edinburgh we are one of eight. So we will be getting additional funding really looking at raising the attainment of our children, making sure that it’s not a postcode lottery, it’s not where you come from that affects your life chances, that everyone sets off on an even footing.

Is there a lot of engagement and interest with parents in the area?

The parents. I’ve been really impressed with how engaging they are with the school. They all clearly want the best for their children and are really keen that they make good progress and really have the best time they can at school. Generally, parents are very involved and if we are having class assemblies parents are invited along to see. We had primary two’s class assembly on Tuesday and a number of parents came along. They were doing living and growing so they were talking about the parts of a plant and how plant seeds can germinate. They were very impressive actually.

There’s a lot of families that have been in Clovenstone since it was built. is that something you’ve found?

Yes. A number of parents that I’ve met with already have come through the school and had a very positive experience actually with the school themselves. A number of parents, our Primary one teachers taught them themselves in primary one. Which I think makes them feel a little old, when it comes to teaching the children of children you’ve taught! But it does have a real community vibe in that its mostly the same sort of families coming through the school so its a nice sort of continuity I feel.

How are the primary school’s links with Wester Hailes in general?

The links with the high school, I’ve been very impressed with actually. Our primary sevens, in preparation for their transition to secondary school they from October to Easter went up every Thursday morning to do bits of literacy, numeracy and various other subjects, P.E et cetera. The links have been great.

We were down last week at the Health and Wellbeing cup. We won the cup last year but we had to give it back this year which we weren’t very happy about.

In general with the school, the children are very respectful in their behaviour, they try very hard. I’ve been really impressed so far. It’s great!