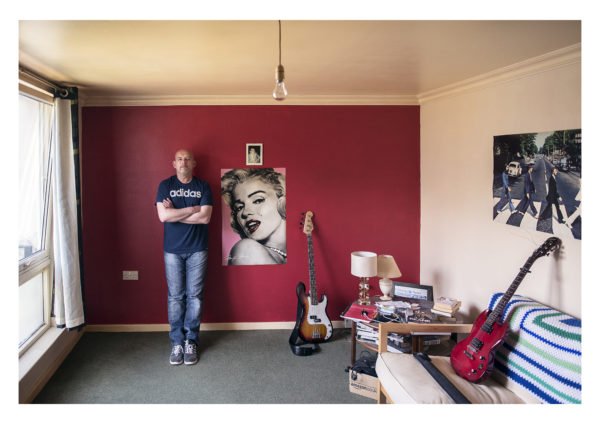 Here is the photograph and interview with Douglas Cormac who speaks about growing up in Clovenstone and his experiences moving back to the area after having lived away.

My name’s Douglas Cormac. I orginially moved here in 1972 as a 4 year old – I’m now nearly 49. I moved away for a considerable amount of time and I’ve been back about 10 years. In total I’ve probably stayed here a total of 25 years over the last 45 years.

How did you find coming back to the area?

Aye, it has changed. When I first moved here in ’72 things like the primary school across there weren’y even there. Clovenstone Gardens they were just mud fields, that’s all they were. We didn’t even have Mr Amjad’s shop round the corner. Strangely enough we moved from Clovenstone to here and who had the local shop, Mr Amjad. We were only here a matter of days and he had taken over the shop along the road.

Were you here then when the primary school was built?

Yep. Originally I went to Hailesland primary school. Which is now Canal View so we had to walk down from here to there. I’ll no bore you with silly wee tidbit stories but the first day I was there. Me and John Aitchison’s son, John the oldest laddie, Archie. We’d gone down for the first day at Hailesland at lunchtime we genuine looked at each other “I canny be bothered with this” and we walked all the way back. We were just little totties of five. People would be worried about doing that now and quite rightly so. We walked in and my Mum said “what are you doing?” and we said “we didn’t fancy that” My Mum said “you’ve got another 11 years of that!” so aye they took us back down. Then that opened in 1975.

Aye I played school football for them for 2 years, I played at the WHEC as well for 4 years. I went to Germany with the WHEC and played football there, what was that in ’83. Aye the school wasn’t there at all. It was a trek down to Hailesland and if I remember rightly the Centre shopping centre wasn’t there originally we had to go down to Sighthill.

But aye the school wasnae there but I went there from ’75 to ’79 then went to the WHEC after that. School was alright. They had a Sister there, Sister Margaret a nun. She was invovled, not just for the Catholic, Roman Catholic students but everybody. They had here there which was a very strange thing. No, it was certainly interesting.

What’s your favourite thing about living in Clovenstone?

I would have to say its the sense of community. There is still a lot of faces around from back in the day. I mean I was talking to people hadn’t seen for, In some cases 40 years. people like Sas. I used to play football with Sas when we were small children when we were in Primary. There used to be football pitches at the top where the railway track runs parallel. We used to play there every Friday night, me and Sas. He’s never changed. He’s still a cheeky Beggar! I knew straight away who it was because he’s never really changed.

Everywhere you went here people played football. Everywhere. There was always people playing football. That’s sad to see that you don’t see that. It’s just moved on. Football, we were talking the other night you couldn’t go anywhere for people playing football. Its just changed. Plus the area has changed, there’s been a lot of building on the area. I say to you about the sense of community and stuff like that. There’s a thing missing there though. We used to have all the gala days back in the day. We used to have them. That was quite a thing. Things like that I’m all for it, but the buildings they’ve knocked a lot down, is it better? Structural wise I suppose it is. It’s not so much a concrete jungle as it was before where everything was very grey. The sense of community is still there certainly, I would say. Definitely.

I’m glad I stay here certainly. I’m with the Housing Association who are a good support so the support network’s there. I mean I think people have local amenities closer. These thing’s weren’t there back in the day. I think its onwards and upwards certainly for Clovenstone. I don’t know what the plans and for the area long-term but certainly I think the sense of community spirit is there. It’s always been there and that will never go away. We will see what happens down the road but I can only praise the area. Long may it continue I would say.