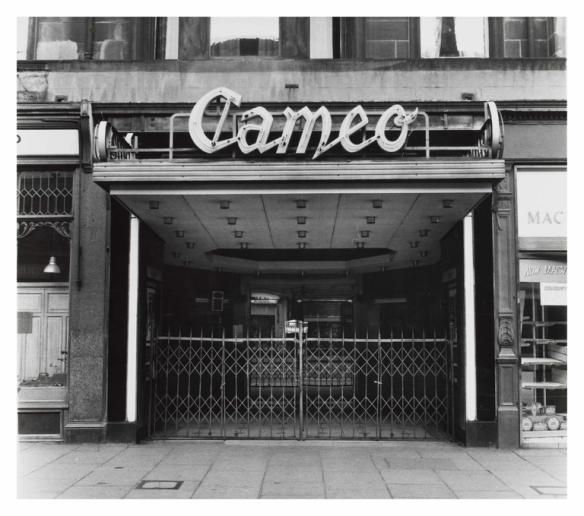 In the late 1950’s Edinburgh had nearly a dozen ‘Picture Houses’ within the city centre and more in the suburbs. Many limped on into the ’70s as attendance fell and TV offered a choice of 4 monochrome channels (in the early years we only had BBC 1 and STV).  A few survive today such as the unsinkable CAMEO which retains its arty ambience in spite of partition into 3 mini-cinemas. My newly-married Aunty Nan had recently set up home near Tollcross, furnishing the flat with Ercol beechwood furniture, bold blue and white striped plates and mugs (which had only been used by tradesmen up until then) as well as a bone china tea service which was a wedding present only used for distant relatives. She liked to wear Jaeger ski pants, a Duffel coat and a silk headscarf when out and about. At Christmas my aunt (my Mum being unavailable as she worked at Ferranti’s) would take me to see Disney cartoon films such as ‘Sleeping Beauty’, ‘Peter Pan’ and ‘Pinnochio’ which were Cameo perennials at yuletide (it’s fair to say that Pinnochio gave me nightmares – it is a very disturbing movie). Later in my final year at Primary School our teacher Mrs Young (who must have been related to Miss Jean Brodie for she often called us her “creme de la creme”) took our class to several Shakespeare movies at the Cameo. I remember Paul Stirton shared his Toblerone bar while a copy of ‘Lady Chatterly’s Lover’ was passed around – it had just been un-banned and young typists queued up in John Menzies to buy the Penguin paperback from a pile kept behind the counter.

Mostly though my mother took me to the MONSEIGNEUR News Theatre in Princes Street which screened Gaumont-Pathe newsreels padded out with ‘Shorts’ – 30 minute travel documentaries, cartoons and an American comedy series about a seedy character called JOE DOAKES who leered out from behind a giant billiard ball in the opening credits. Footage of the Hungarian uprising contained disturbing images of the dead. We went to see a screening of the entire Floyd Paterson/Ingmar Johannson World Heavyweight Title fight which the Swede unexpectedly won. When Nat ‘King’ Cole died we saw a bio-drama about him in that long narrow smoke-filled temple of the moving image. These News Theatres died with the advent of television and the Monseigneur became the sleazy JACEY until the mid-70s.

When old enough to roam around on Saturdays with my pals we often went to POOLE’S SYNOD HALLS in Johnson Terrace near the Usher Hall. This cinema along with the PLAYHOUSE and the CAPITOL or ‘Cappy’ became familiar haunts of my boyhood. I especially liked the Poole’s (Poole was a prominent local businessman who owned several other cinemas) because it was in a backwater and usually nearly empty, also you could see the movie twice if you liked without harassment. It must have formerly been a church because the two upper balconies were at right angles to the screen so you got a stiff neck. During the show Kenneth More or Richard Todd would be in a tight spot until the tension was broken by a slamming door or a clattering seat. This easygoing establishment was where we first went, underage, to see X-films such as ‘The Pit and the Pendulum’ and ‘The Man with X-Ray Eyes’ in which Ray Milland applies eyedrops containing a chemical concoction he has developed in his laboratory which enable him to see women taking their clothes off through walls (the chemical turns his eyeballs purple).

Sometimes we went to the GAUMONT in Dewar Place off Morrison Street where we saw ‘Sink the Bismark!’ This big cinema was gutted by fire in 1963, its red sandstone shell still stands awaiting re-development.

The PLAYHOUSE was Edinburgh’s flagship cinema and it was as opulent as the ‘Queen Mary’ with thick carpets and many Art Deco fittings. Recently I went to a concert there and it was sad to see most of these have been ripped out during “refurbishment” in recent times, although its plush safety curtain survives along with the black and white marble vestibule and staircase. We often skived off school to see the latest James Bond movie such as Goldfinger and Thunderball at the Playhouse. Could I learn from the example of Sean Connery’s sleazy patter (as Bond) how to ingratiate myself with young women?  He made it look easy and he was a son of Fountainbridge with a serious receding hairline problem while I was a son of Drylaw with vigorous Byronic locks. No. In real life Sean Connery possessed a charisma which could not be imitated.