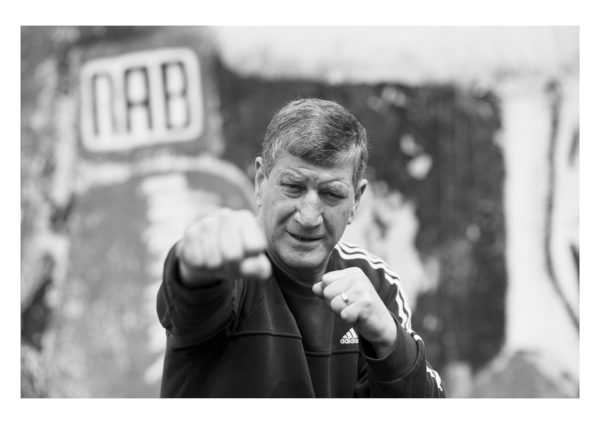 Below are the photographs and interview with Rab McEwan who speaks about how he became interested in boxing, creating the Clovenstone Amateur Boxing Club and the success of his son, Craig.

You can listen to the interview with Rab here:

How long have you lived in Clovenstone?

I’ve been here for about nearly 30 years.

What was it that got you interested in boxing?

My boys. I started boxing when I was 33. I used to do a lot of marathons, you know. I was a runner then they asked me to go to the boxing with them. I took them down, they lasted 6 weeks and I just kept on going. I had 100 fights, boxed everybody, boxed for Scotland a few times. Then I just retired and opened this place.

What was it that made you wanted to open this place?

It’s good for the area. This was a school, it was a wee hut here for many years and I used to do the boxing in the gym hall and the Community Centre. Rab Byfield, my ex-boss he helped me to get this place. They knocked this place down then they got a grant of £300,000 and they built this place especially for the boxing. Other than that, my other boss, Sas Martinez he helped me a great deal with this club. We’re still running strong, you know what I mean.

Was there a lot of support from Clovenstone when the club was being built?

Yes. Everybody sort of said “Whats Happening?” and I said its a Boxing Club. We’re still here!

Have you had a lot of success?

Success! My boy, Craig McEwan, boxed all over America, Freddy Roach. We’ve had Scottish champions, international boxers. I’ve been quite busy. I do a lot of kids now. There’s not a lot of clubs now that do kids that age, 5 upwards, but I do them, an hour and a half, you know what I mean.

Is that popular in the area?

It’s popular here. It gets them off the streets ,you know what I mean. Helps them, you know.

How has Clovenstone changed in the twenty-odd years since you set up?

Do you feel like there’s is a big community spirit in Clovenstone?

There’s always a community spirit! We’ve got a pub down the road!

And that hasn’t changed over time at all?

Never changed. Clovey never changes. There’s a lot of nice people in Clovenstone, you know what I mean. Everyone calls it the concrete jungle but I think it’s a good scheme. Everybodys friendly.

When you were boxing, how successful were you?

I’ve always loved boxing. I’ve always been active. I like boxing it’s good. I’d watched it for years, Muhammad Ali was my best boxer. Boxing’s good it keeps you busy, keeps you fit, you know what I mean.

Does the club have any links with other community things in the area?

I do Forresters High School, I do WHEC, I do the library, I do Clovenstone school. The kids they come up just for a workout, not boxing, but just keep fit. its different from P.E when they go to the gym and they get the bean bags out. I’m no into bean bags, I’m into speed!

When you are working with the young people. Do you feel that boxing helps them?

Do you do anything with the community centre at all?

I used to be the janitor in the community centre for nearly 18 years. I just retired because they were wanting me to go here, there, everywhere.

I’ve been quite successful with the boxing club. I mean it’s been here for years and everybody knows it now, you know what I mean.

My boy hes going back to America to go on the undercard of Amir Khan. So that will be good for him cause he is well know over there. He’s not as well known here!

Thanks for listening or reading this Clovenstone Voices you can find the other interviews and photos here. The exhibition is on display at the WHALE Arts Centre  until 16 November 2016 and is open to the public from 9.00am – 5.00pm.